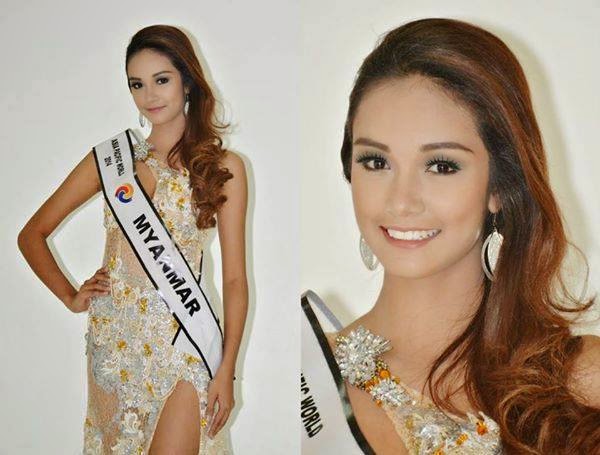 Dethroned Miss Myanmar Beauty Queen May Myat Noe attack back on korean agency which accused her as not professional and lying to the people in agency.

As quoted in foreign newspapers few days ago

"It's our responsibility," he said. "If she has no good nose, then maybe, if she likes, we can operate on her nose. If it's breasts, then breasts."

"We thought she should be more beautiful ... so we sent her to the hospital to operate on her breasts," Kim said, adding that sponsors picked up the $10,000 tab, as they had for previous winners.

Today , May Myat Noe posted on her facebook about the problem between her and korean agency.

During the past few days, an onslaught of false accusations has been made to me with regards to my premature return home from the Republic of Korea. My first reaction would be to express profound gratitude and heartfelt appreciation for the love and support extended to me by the well wishers both from Myanmar and from abroad. Their trust and sympathy in me has been a major contributing factor in my ability to persist in this carefully orchestrated scheme to defame me. Until now, I have been keeping my silence but today, I found myself in a position where it would be unforgivably irresponsible and blatantly unpatriotic of me not to defend the honour of my country when my accusers have started insulting the dignity of our Union. What saddened me most, as a Myanmar girl, is to witness the national directors here no longer attempt to hide their tone of approval for the false allegations that also question the integrity of our Nation.
One of the accusations made to me by the Miss Asia Pacific World organisation is that I lied to and never had respect for the media and fans that made me the winner. For that, I must say I have absolutely no recollection of such complaints from either the members of the press or from the public as a whole. In fact, in the contract that I had signed with the Agency, I was promised a proper accommodation for the three months stay in Korea as a vocalist. I was shocked upon arrival that no such arrangement is made. The organisation also accused that my mother illegally acquired a three month visa despite the fact that their letter of invitation was meant for only until August 29. Here, I must impress upon them the fact that, regardless of the limitations made in their invitation letter, it is the prerogative of the Korean Embassy here in Yangon to issue a visa to any applicant for any period of time as they see fit. Some even suggested that I took away the Crown after I was dethroned, but the letter by the organisation to that affect has not even been issued until I left Korea.
Although I'm not at all surprised that they have elected to omit the actual facts that have made me return home, I am amazed by their flagrant audacity to shift the guilt onto me. There were regrettably many factors, some of which technical, over a period of time that made me realize that it would be unwise to continue working with them, but these following eye openers are the ones that I should make public aware. My decision to return home was reached mainly due to the fact that;
-I was put under duress to undergo a head to toe cosmetic surgery which I refused
-my mother, who was there with three months visa, was forced to leave Korea on pain of termination of my contract even though the very contract stipulates my family can stay over.
-I was given a strong impression that I should leave Korea for a while, without my mother, to Japan for a few days with no apparent reason but just to extend my Korean visa.
- I was told that, in order to generate funds to produce my music album, I need to accept invitations to escort some business tycoons whenever they require my company.
There was also some suggestions that I abused my position as a pageant winner to receive an expensive plastic surgery provided by the organisation. Should there be a need to prove in a defamation case that I did not go under the knife to beautify myself? My only regret would be not protesting firmly enough when the national directors changed my age from 16 to 18.
More explanations in details will be made to the members of Myanmar press in the vernacular and I must admit I am relieved that my mother and I have secured audio and video evidence whenever we sensed there are some irregularities in the conversations of both the Korean organisers as well as their Myanmar national directors.
Even though I am absolutely certain that I have never exhibited any conduct or behavior unbecoming of a beauty pageant winner, I find no reason to keep the Crown in my possession, with honour, handed out by such an organisation. That, however, doesn't mean that I will relinquish this object to the national directors because their attitude and untrustworthiness made me believe strongly that their further involvement in the process of any beauty contest or pageant should be discouraged and even prohibited. Due to some flagrant lies carefully embedded in the statement by the organisation and the shameless attempt by the national directors to please the former in any way, the dignity of our country is being mocked in this sordid affair. In their effort to discredit me, they have created an atmosphere where the press is starting to report more along the line of the Myanmar Beauty Queen stole the tiara and went back home. Therefore, it is natural for me to feel that an apology should be demanded to rectify the damage they have done to the integrity of my country. Once such remorse became apparent, I shall return the Crown willingly without a trace of reservation. Well, I mustn't take up much of your time and, again I shall take this opportunity to thank the public for their sympathy and understanding.
Labels: May Myat Noe Miss Asia Pacific World 2014 Miss Myanmar May Myat Noe